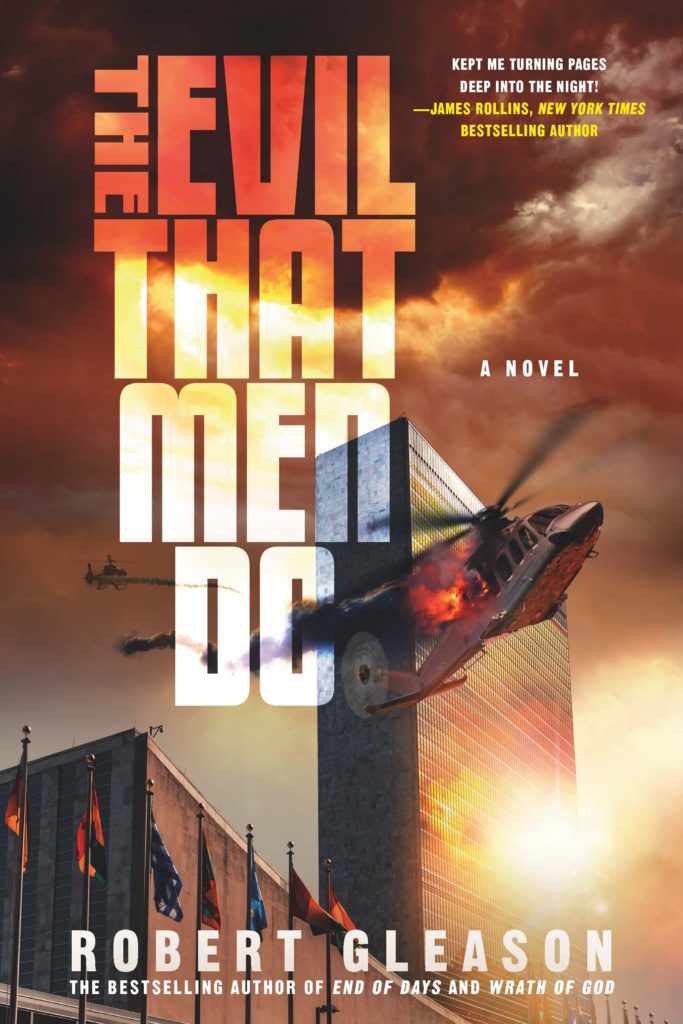 The Evil That Men Do

ROBERT GLEASON BRINGS HIS A-GAME TO THE EVIL THAT MEN DO, A TERRORISM THRILLER STEEPED WITH EQUAL PARTS TERROR AND WIT

Income inequality and the offshore hoarding of illicit black funds have reached such extremes that the earth’s democracies are in peril. The oligarchs are taking over. The people worldwide, however, are rising up, and they demand that the UN seize and redistribute all that illegal filthy lucre. But it will not be easy. The world’s ultra-rich super-villains will not go gentle.

Mikhail Putilov, Russia’s strongman; J. T. Tower, the American president, and Wahid al-Waheed, the Saudi Ambassador to the US will do anything to stop and destroy this global expropriation moment—even if it means nuking the UN. Only three people can stop them: the crusading, muckraking, investigative journalist, Jules Meredith; ex-CIA agent, Elena Moreno; and her boyfriend, the ex-Special Forces Operative turned cybersecurity billionaire, John C. Jameson. If these three fail, the nuclear fireballs will blaze; democracies around the world will die; the UN will burn, and the Age of the Great Global Oligarchs will begin. 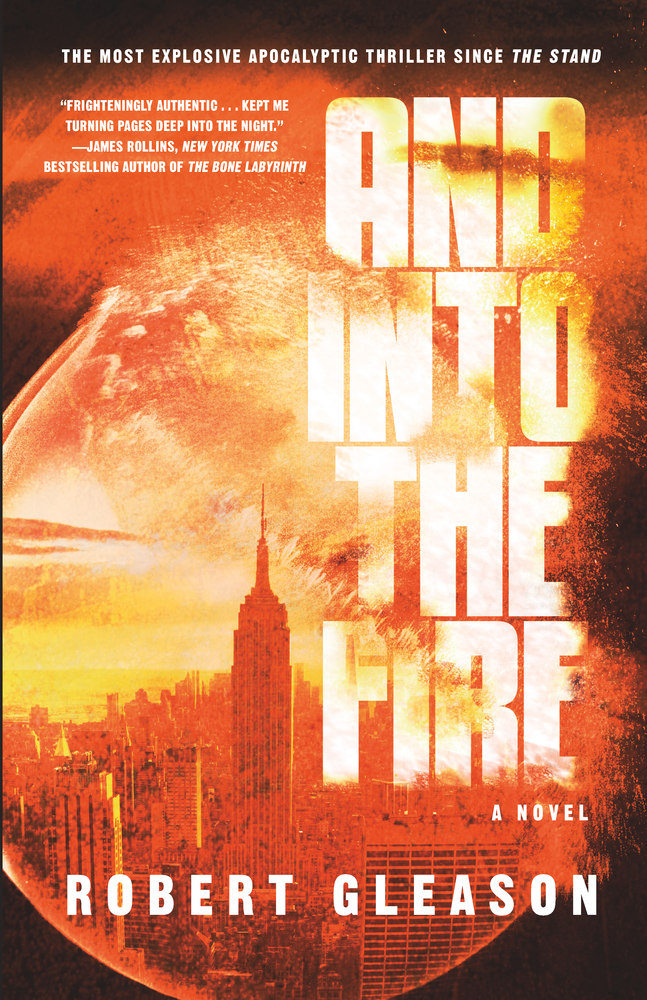 And Into The Fire

THE MOST EXPLOSIVE APOCALYPTIC THRILLER SINCE THE STAND

After forging an alliance with Pakistan’s intelligence services and the notorious terrorist group, the Tehrik-e-Taliban-Pakistan (TTP), ISIS is ready to achieve its ultimate dream: Forcing the United States into a clash of civilizations in the Middle East. They hope to accomplish this by setting off Pakistani nukes in or near New York, Washington, DC, and San Francisco.

The head of the CIA’s Pakistan desk, Elena Moreno, and an intrepid journalist, Jules Meredith, are on their trail. But, the terrorists’ financier, a powerful Saudi ambassador, is blackmailing a corrupt American president, and now both men will do anything to discredit the two women—to the point of having them killed. Recruiting the help of John C. Jameson, a reclusive ex-marine turned billionaire hacker, the three endeavor to stop the terrorist team before they infiltrate the US, armed with their Hiroshima-style nukes.

Before they can begin, however, they learn another terrifying secret. A team of terrorists is planning to melt down a major nuclear power plant near New York City. Can the three friends stop these nuclear 9/11-type assaults? The world must hold its breath and wait.

A PAGE-TURNING, HEART-STOPPING EPIC NOVEL OF NUCLEAR WAR, BASED ON 28 YEARS OF REAL-NEWS RESEARCH INTO THE FEASIBILITY OF NUCLEAR ANNIHILATION

Sounds like horror fiction? In fact, it’s an extremely plausible likelihood, according to noted editor, author, and the world’s foremost expert on nuclear terrorism, Robert Gleason. In his resoundingly acclaimed new novel, END OF DAYS (Forge Books; September 20, 2011; $24.99 Hardcover; ISBN: 978-0-7653-2992-9), Robert Gleason brings this horrific scenario masterfully, chillingly, and, above all, believably to life. Inspired by a prediction futurist Herman Kahn made 50 years ago, this gripping work of fiction is backed by Gleason’s rigorous research—nearly 30 years’ worth of probing the alarming lack of security at nuclear storage facilities in the U.S. and other countries; the shocking availability of nuclear bomb-fuel and bomb-building technology for sale, by governments and on the black market; and the ease of making crude but frighteningly effective nuclear bombs.

Gripping and harrowing, END OF DAYS weaves an intricate, action-packed plot around the very real possibility of nuclear apocalypse. It begins in Mecca with Kate Magruder, intrepid reporter. She has come to cover a revolutionary pilgrimage: Russian’s minister of defense, Vladimir Malokov, nicknamed “Mad Vlad” for his wild and ruthless antics, has abruptly converted to Islam. But Kate’s real reason for following the flock is much more complicated. Her former field partner and ex-lover, John Stone, MLB star turned maverick journalist, may also be in Mecca—hot on the trail of loose nukes. As Stone demonstrated in a disturbing video message, virtually anyone can stroll into any one of the  world’s many ill-secured nuclear storage facilities, scoop up handfuls of bomb-grade plutonium, and, with the help of a hunk of cannon (easily bought or, almost as easily, stolen), whip up a working model of the Hiroshima “gun-barrel bomb.”

Driven by a huge cast of fully drawn characters, END OF DAYS is filled with hard facts about real-world nuclear security risks and vivid depictions of the probable fallout. Along the way, Gleason compels readers to consider:

Formidable nuclear weapons like the Black Stealth Crow, “a creature of inconceivable cunning, elusive as smoke, invisible as night,” designed to evade infrared detectors, change shade in a flash, and hide in plain sight;

The catastrophic impact of a nuclear terrorist strike on Beijing…or on New York City’s lower east side, decimating Wall Street;

Hellfire on earth—ignited by nuking the Yellowstone caldera, a gigantic, super-volcanic crater. Such a blast would wreak the unspeakable—a hurricane of blazing embers, a cyclone of infernal ashes, and mountains of debris—across most of the U.S. and southern Canada. 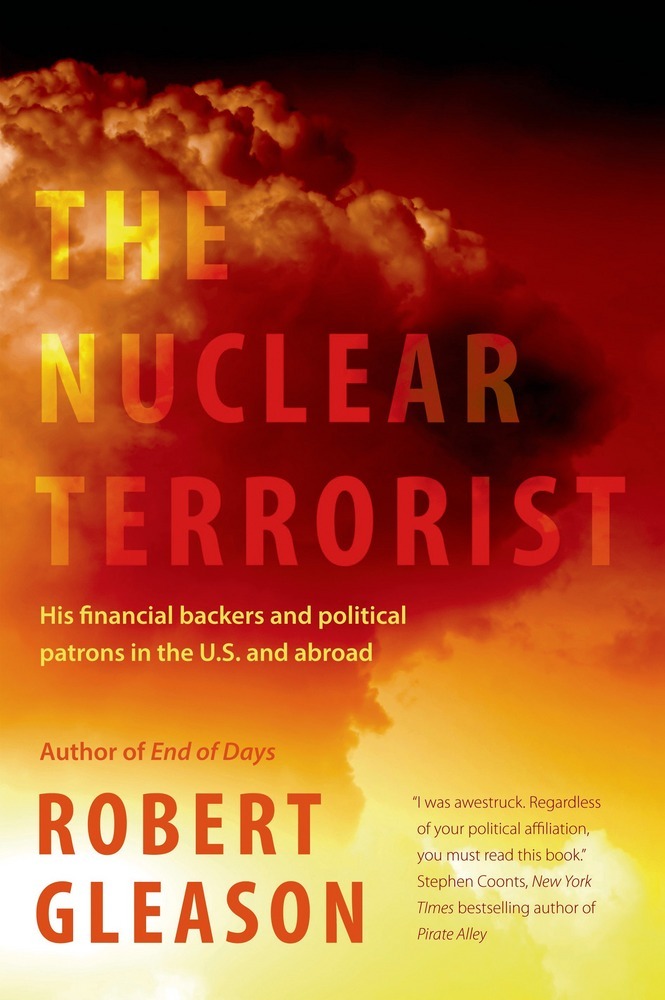 HIS FINANCIAL BACKERS AND POLITICAL PATRONS IN THE U.S. AND ABROAD

All of America’s presidents have said nuclear terrorism is the country’s most frightening threat.  Yet U. S. Officials prefer to profit off rogue states instead of opposing and obstructing their nuclear programs.

George W. Bush staffed his administration with officials who privately profited off nuclear states.  Donald Rumsfeld worked for a company that tried to sell nuclear reactors to North Korea.  Dick Cheney’s firm, Halliburton, built up Iran and Iraq’s energy sectors, thus bankrolling their nuclear programs.  President Obama staffed his administration with nuclear power people and tried to help Saudi Arabia acquire nuclear reactors, even though fifteen out of the nineteen 9/11 hijackers were Saudis and former Secretary of State Hillary Clinton had informed Obama that the Saudis were the world’s primary financiers of Sunni Islamist terrorist groups such as al Qaeda and ISIS.

Nor have these administrations done much about the poor security at U.S. nuclear facilities.  Intruders in mock infiltration exercises smuggle nuclear bomb fuel out of these sites at least half the time.  And the problem isn’t confined to the United States.

The world leaders have done a terrible job of defending their nuclear installations. In Pakistan, al Qaeda-ISIS-style groups have blown up sections of their nuclear sites.  In the US an 82-year-old nun with a heart condition successfully broke into America’s biggest nuclear bomb-fuel storage facility and sprayed peace slogans on the building housing most of this country’s bomb-grade highly enriched uranium. She eluded guards for several hours.  Terrorists could also melt down America’s poorly secured nuclear power plants with shockingly little effort, poisoning for many decades to come an area the size of Pennsylvania.

Nuclear labs have proved that terrorists can build a low-tech nuclear-bomb-fuel reprocessor in months and turn a nuclear power reactor into a nuclear bomb-fuel factory, yet America’s leaders refused to recognize that nuclear power plants represent a proliferation threat.  Moreover, powerful terrorist nukes are shockingly easy to build once the terrorist has his nuclear bomb-fuel.

The Nuclear Terrorist reveals this and much more about the state of this threat today.